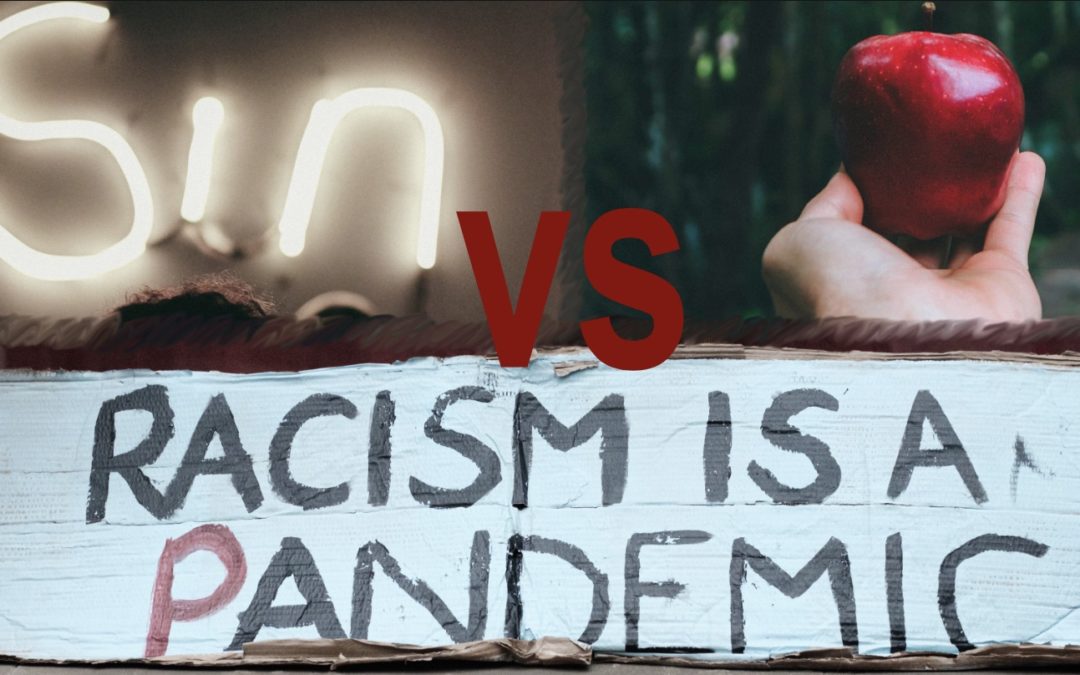 Some Reflections on the Killing of George Floyd, Racism, Sin and Christian Witness

The death of George Floyd, killed by Minneapolis police responding to an alleged minor breach of the law, has revealed, once again, the deep racial fractures that divide America. Cities are under curfew and the police, equipped like an army, look like they are prepared for war with their fellow citizens. Sin tends to be trivialised and individualised in ‘advanced’ Western culture. It’s a naughty desire that you secretly deserve to have fulfilled; it’s the self-indulgence of having too much cream with your strawberries; or, getting more serious, it’s using privilege and power to shame opponents on Twitter. Christian theology has a lot to say about sin and its seriousness – and that’s why Christian theology also has a lot to say about racism and violence. What follows are some theological reflections on what has been happening over the last week. I’m talking about America not because the US somehow has a corner on sin (we are all pretty good at being ‘original sinners’) or out of some crude anti-Americanism, but because of the events unfolding there raise theological questions for Christians everywhere. I’ve traveled quite extensively in the US, have many American friends and keep up to date with American politics – but I don’t naively claim that I, an outsider from Ireland, can arrogantly pronounce judgments (or solutions) from a distance.

1. Sin is a virus that God will eradicate
If you’ve seen previous posts you will have noticed I’m reading Douglas Campbell’s Pauline Dogmatics. Chapter 5 is ‘Resurrection and Death’, and in it he says some remarkably relevant things to what is unfolding in the States – on both systemic racism and corona virus. From Genesis 3 on, death is inextricably connected to sin. One way of looking at this is death as ‘God’s solution to sin’ (102). In other words, sin is so toxic that God will not allow it to survive. It has a death-by date. Sin has no future, it will be destroyed for good and the new creation is virtually unimaginable to us because it is pretty well impossible to imagine a world without sin and death. God is a trinity of love and justice, the author of love and peace and joy. Sin – hatred, violence, injustice, exploitation, selfishness, greed and so on – is antithetical to God’s being and good purposes. The two co-exist in the present, but only on a temporary basis. This is the fundamental shape of Christian eschatological hope. In Galatians 5, this antithesis is pictured as the conflict between the flesh (see ‘the present evil age’ 1:4) and the age of the Spirit. They are utterly opposed to one another. Those who belong to the realm of the flesh will not inherit the kingdom of God. So Campbell says this “God absolutely refuses to give life to a cosmos that is contaminated with sin. Its existence must end. Death is God’s judgment on things that have been contaminated by sin. It is the refusal to give life to those things that have turned from life to evil …” 103. Paul’s Jewish understanding of sin took seriously its deadly effects. Sin contaminates and much temple ritual is about purity and cleansing offending pollution. It is not to be allowed to spread. It must be atoned for and repented from. We moderns who laugh at the outdated notion of sin should take pause. The COVID-19 crisis is a graphic picture of how sin works. God’s response to sin is like human response to a deadly virus (Campbell wrote this before COVID-19 – talk about a prescient illustration). Drastic measures are needed to contain it – and one day eradicate it from the world. “And in just this sense, God is implacably committed to the containment of sin within this world and this age, and to its ultimate termination, in death. The crippling and deadly virus of sin cannot be allowed to spread. Indeed, we are fortunate that God is so resolute in this opposition to something that we tend to treat rather too lightly.” (103)

2. We are all under the power of sin – and all of us face death
One of the many myths of modern capitalism is that individuals can exist in a nice consumer bubble, having their dreams and wishes fulfilled with no cost to the planet and in complete detachment from the anonymous and distant people who made those designer jeans somewhere far away and who may, or may not, be working in a sweatshop.
Likewise, some myths about sin insulate us from its reality in a comforting cocoon of private piety.
– (i) it does not exist
– (ii) if it does exist, it is little more than a euphemism for a poor personal choice that we will regret
– (iii) or perhaps if you are a Christian, sin is a wrong action or attitude for which we need confess to God and repent from.
While (iii) is partially true, it fails to take seriously the power and systemic reach of sin. Every one of us is implicated in it. Every one of us is under its power. Every one of us faces death as a result.
What is happening in America shows that sin is real, powerful, destructive and deadly. It is not a myth or a primitive outdated idea. People who experience systemic injustice on an everyday basis know this first-hand.
And those who don’t have this everyday experience (generally those with White privilege) tend to resist systemic analysis of sin – they tend to limit sin to the individual sphere. In contrast to this, listen to what Campbell says about sin – and I agree with him completely “Sin extends all the way across and all the way down. We are saturated with it – soaked in it.” (104)

3. Racism is one form of sin: it has a long history in America and has spread for generations, deeply contaminating American public life
The diagnosis of sin as a virus reminds us that it’s highly infectious; it spreads death and once unleashed, it can’t easily be reined-in again.
Racism is inextricably connected to slavery; it is in other words a sin with a long history. It’s one of the great sins of the modern era, perpetrated by White colonial powers to prop up their expanding global economies. You don’t need to be an expert on the history of slavery and race relations in the US (and I make no claim to be) to know that this original ‘great sin’ has shaped American history in all sorts of destructive ways and poisoned public life. (Again, this is not limited to America but takes a very particular form in the US).

4. The calling of the church of Jesus Christ is to bear witness to ‘death of sin’ in the present
The only ‘solution’ to the problem of sin for each one of us is to die – and somehow come out the other side of death, free of the power of sin. This is precisely what the good news of the gospel announces has happened. In the death and resurrection of Jesus, God has atoned for sin and defeated death. In this sense, sin has been quarantined – dealt with for good. But here is one of the New Testament’s most surprising twists – this quarantining of sin and death is not only in the future. The future has already arrived. Believers are already ‘raised’ to new life through the Spirit; they are already ‘new creations’. This is technically called ‘inaugurated eschatology’ and is everywhere in Paul and the other writers of the NT. If those ‘in Christ’ share in his resurrection life now, then the mission of the church is to bear witness to this reality. By its life, words and deeds, the church is to embody an alternative politics to that of the world. A politics of peace; justice; love; joy; of a self-giving community, transcending all racial and ethnic distinctions; of sharing burdens and resources; of together being conformed to the image of her Lord. All while awaiting in hope the ‘Day of the Lord’, God’s final defeat of sin, death and all powers that oppose his good purposes, resurrection and the launch of his new creation.

5. Particular challenges for the church in America
If the above is the case – and I think this is a fair description of what orthodox Christianity believes – then this means at least three things for brothers and sisters in America, particularly predominantly White churches. Again I offer these as observations, simply as a Christian looking on with grief at the suffering, pain and injustice experienced by so many black men and women – many of them brothers and sisters in Christ. They are not meant to imply that these sorts of things aren’t going on – I’m sure there are countless examples of where they are. The same sorts of questions could be asked of any church in its own national context of ethnic or racial division. [And some of this relates back to a book I wrote back in 2003 on how evangelicals in Northern Ireland responded politically and theologically within a violent conflict over national identity].
1) The primary calling for brothers and sisters in America is to embody a different story to the story of racial division, hatred, violence, suspicion and fear that is tearing the country apart. The church is to be a ‘window’ into God’s new creation, not a mirror reflecting back the sins of the world.
2) The first response then is not ‘outward’, locating fault in others, it is inward, involving difficult and searching self-critical reflection:
– How in our own contexts, can we actively seek to be agents of love, hope, peace, forgiveness and reconciliation in a broken and divided world?
– Where do we need to acknowledge our failures to act – especially where our ‘Whiteness’ has insulated us from the realities of the sin of racism?
– Where have we mirrored the world?
– Where have we failed to be communities where all are one in Christ, of equal worth and standing in God’s kingdom – regardless of skin colour, qualifications, nationality, gender, social status and where you live?
– How can we take steps to become such communities?
– Where have we mirrored the fears of our culture and its frequent trust in force and violence as a means to ‘solve’ issues of difference?
– How can we build understanding and listen to the experiences of brother and sisters who are suffering daily because of the colour of their skin?
3) Only from such self-reflection, might steps become clear as to what acting for justice might look like locally and nationally. But the primary calling of the church is to be the church, not to be a political lobby group to fix the world. 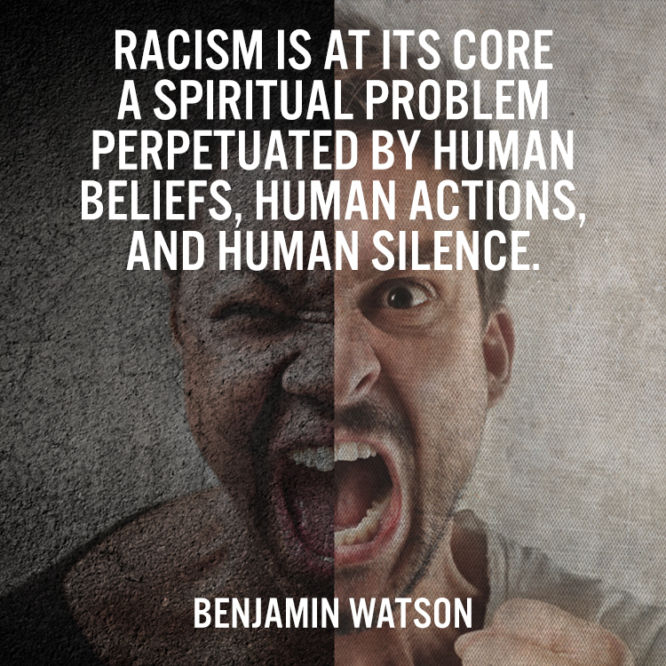 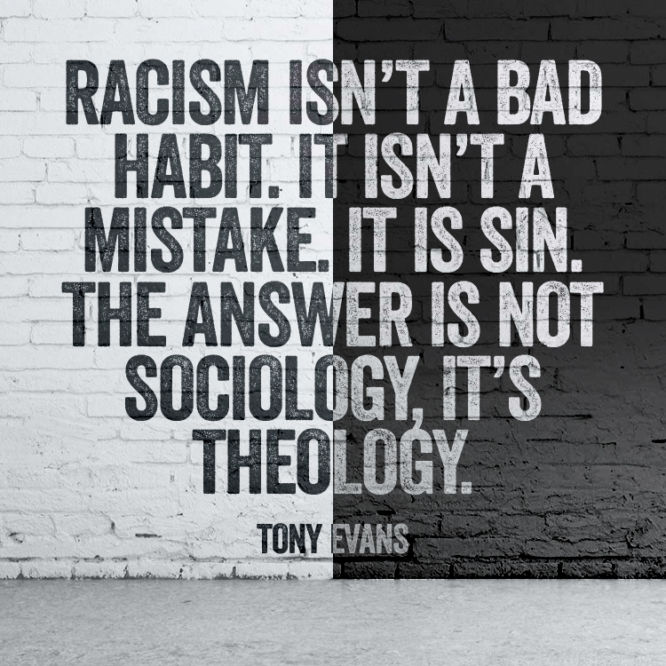